A Debacle in Shambles 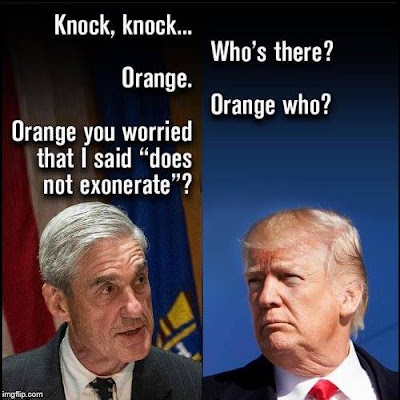 The Trump administration is a debacle in shambles. Yet, members continue to game the system for personal profit or to protect the president. We've seen something like this before with Watergate and Irangate.

Barr was there for Irangate; that's why he's back. He gamed the system then, acting as the defacto attorney for Caspar Weinberger, the former secretary of Defense, and five others who got pardoned by Bush Senior. Trumps is betting that Bill Barr will pull off a brilliant move thus getting Don Jr, Jared, et al. and himself (of course) off the hook.

Barr is compromised. He compromised himself with the infamous memo vacuously arguing nonsense about Individual Number One being above the law re: obstruction of justice.

What is to be done?
Demand the release of the Mueller Report - unredacted and complete - to the various House and Senate committees. These committees deal with sensitive information on a daily basis. Let the members read it and then subpoena Rob't Mueller and his team to testify to Congress under oath.

We, the people of the United States must know if our president - indeed, our gov't - are crooks.
Posted by Aeneaus 'Nye' Babbage II at 7:50 AM No comments: