Refuting the 'Irrefutable' (or 'I see by your ignorance...') 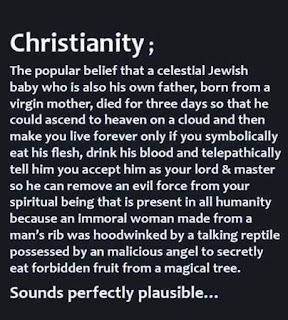 "Ignorance more frequently begets confidence than does knowledge: it is those who know little, and not those who know much, who so positively assert that this or that problem will never be solved by science." Charles Darwin

I've been watching a series on YouTube (laugh if you like...) about what should be frivolous frippery; the pathetic attempt by Creationists - in faux debates with actual scientists - to disprove (or, at least call into question) the veracity of Evolutionary Theory.

It should be a romp, given that Creationists are saddled with the woeful ignorance of the natural world as 'revealed' in the Bible. (nota bene: There are other religions who cite their ancient tomes but most Creationists are of the Protestant-Christian sects.)
And in the other corner... the abundance of scientific data from a myriad of scientific disciplines should be able to simply overwhelm the absurd Bronze Age theories about how the world got this way.

Should be...
But, it isn't.
Not in the United States.
The trifle turns into a full-blown gorge-fest of info; gruesomely distorted facts entwined with out-and-out balderdash, countered by steely-eyed recitations of referenced scientific findings and supported sources.

One of 'god's prophets on Earth' is a yokel named David C. Pack, who pastors 'The Restored Church of God' (sic). Pack has a video series (remember video?) that promises irrefutable proof that 'god' exists and concurrently disprove the Theory of Evolution, plate tectonics, modern cosmology, the origin of the universe, quantum physics and the beginning of time.

That's a fairly large hurdle to leap in a 5-part video series. (Carl Sagan had much less to cover in 'Cosmos' and it was 13 episodes.) It is especially daunting given that David C. Pack knows absolutely nothing at all about evolution, cosmology, or anything else that pertains to scientific method or study in the slightest degree. The man would not be able to pass an 8th grade general nature science course in Iowa (no offense to Iowa), yet he sincerely and passionately promises that he will be able to prove conclusively that 'god' exists using 'science' as his proof.

Pack fails miserably, as might be expected.
Imagine if David had had neither sling nor stone. Or arms. Or feet. Or a brain.
Talk about bringing a knife to a gun fight...
Pack brings nothing but a smirk and a smile to a nuclear detonation.

Once again - Dunning-Kruger Writ Large!
Mr Pack is simply too stupid to know how just how ignorant he is.
My trouble with this is this: There are many Americans who believe in what he blathers in his utter and contemptible ignorance. They accept what Mr Pack and others of his despicable ilk sputter and spew.

Understanding a bit of science wouldn't be too difficult for them but for the fact that they have shut off their brains.

Don't get me wrong. Christianity has some very sensible humanistic tenets - 'Love thy neighbor as thyself', for instance, but the dogmatic, blindly ignorant acceptance of allegory and metaphoric story-telling as historic fact (i.e. Walls of Jericho, 40 years in the Desert, etc) is flabbergasting and frankly offensive to any rationally minded person.

Posted by Aeneaus 'Nye' Babbage II at 9:11 PM No comments:

“Everyone says he (Drumpfen-dunce) is crazy – which maybe he is – but the scarier thing about him is that he is stupid.
You do not know anyone as stupid as Donald Trump. You just don’t.”   Fran Leibowitz 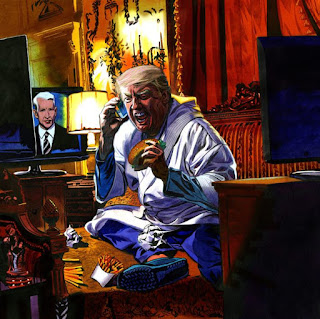 My dear friend (I'll call her 'Gorgeous') and I were exchanging pointed barbs about politics; the Drumpfen-dunce was the recurring butt of jokes and exclaims of incredulity.
I insisted that it wasn't my fault. She accepted my attempt at exculpation with a side-ward look.

Amid our chatter, she shared an idea she had by which he - the Drumpfen-dork - could pay for his Wall.

China.
Sell blocks of the wall to Chinese families. They could then travel to the US/Mexico border to view their family's block (or section) as well as the blocks of the rivals, relatives, associates and either gloat or bristle with envy.
The Chinese would go for this in big way. Having a block in the wall would become a renowned status symbol. Never mind having a private jet - you ain't got a familial block in 'The American Great Wall'?
You ain't got jack.
Loss of face.
Shame.
Other Confucian societies (Korean, Japanese, etc) would go koo-koo as well for a shot at owning a block in The Wall to honor themselves, their families and venerate their ancestors.

'Gorgeous' is a businessperson (i.e. a businessman without the 'Y' chromosome). She sees a business opportunity and builds a plan.
Market and sell the blocks in 'The Great American Wall' to the Chinese.
Finance the building of The Wall with the sale of blocks.
Build The Wall with Chinese contractors and engineers using American laborers.
'The Great American Wall' becomes an instant 'Wonder of the World' and a tourist attraction more than 2,000 miles (3,218 kilometers) long and 30 feet high (9 meters).
Set up all-included tours for Chinese to visit and spend loads of cash in the US and in Mexico.
Invest in hotels, motels, transportation systems, helicopter tours, restaurants (authentic Chinese, of course) and rafts and reams and stacks and heaps of gee-gaws, gimcracks, what-nots, tchotchkes, and tawdry tourist trash to commemorate the pilgrimage.

Gorgeous is a businessperson; unlike the poseur who is sitting on his bed at 6pm eating cheeseburgers, yelling at the TV, scheming to get somebody else to pay for his febrile pipe-dream.

Posted by Aeneaus 'Nye' Babbage II at 2:07 AM No comments:

Russia and the Electoral College 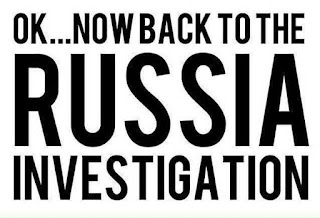 Yes, we're picking that old scab again - for a purpose.

(n.b.There have been 10 other times when the winner got less than 50% of the popular vote in American history.)
http://www.toptenz.net/10-presidents-who-won-with-less-than-50-of-the-vote.php

The discussion regarding the effect of Russian interference has included whether or not Russian interference swayed voters either to vote for Drumpf or to stay home and protest the perceived lack of proper choice.  After all, 48% of the electorate did not vote at all in the presidential contest; 94,977,814 sat on the sidelines in disgust, disaffection or simple apathy.  7,804,213 other voters chose to protest by voting for Stein or other candidates.

However, it was not the popular vote that decided the election in Drumpf's favor, as is well known.  The election was decided by the Electoral College - that mystifying cabal of 'super-delegates' who, in spite of the popular vote, awarded the presidency to Drumpf.

It was a deep distrust of democracy amongst the more conservative Founding Fathers that spurred the creation of the Electoral College.  The Electors, it was determined, would serve to off-set and over-ride a misguided general voting population should a populist demagogue and possible tyrant be chosen.

There have been five times that the presidency was won by the candidate who lost the popular vote; three in the 19th Century, one in 20th and one in the 21st.
https://www.factcheck.org/2008/03/presidents-winning-without-popular-vote/

In 2016, the Electoral College, counter to its raison d'être, chose to adjudge the election in favor of the populist demagogue, Drumpf.
To the point...
It would be interesting to know if Mueller and his investigative team are examining the effect of Russian interference on the members of the Electoral College.
That was where the election was won and lost.
How the Russian interference might have influenced the woeful 25% of American voters to choose Drumpf as POTUS is of less importance.
The more germane question is;

'Did Russian propaganda and  interference  influence members of the Electoral College?'

http://www.latimes.com/nation/la-na-pol-electoral-college-20161110-story.html
Posted by Aeneaus 'Nye' Babbage II at 6:46 AM No comments: