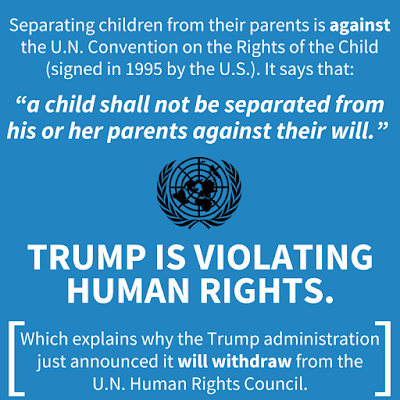 Every day, it's another gigantic faux pas for our apprentice president. Now, he's calling for the elimination of due process in addressing the issue of immigration and granting of asylum. Trump has spent much of his adult life skirting the law and breaking the law when it suited him. He has always been a scoff-law and one who thought nothing of violating conventions, social mores and legal contracts. It seems that Mr Trump now consider the Constitution and the Rule of Law as impediments to his agenda of self-aggrandizement.

This is simply unacceptable and quite obviously intolerable behavior from the sitting president. It is long past time to call for his removal from office. The consequences of inaction seems dire. The consequences of Trump's impeachment  and the prospect of a Pence presidency (however short-lived it might be) one the other, when compared to the utter and possibly irreparable harm Trump is doing to international alliances and allegiance to the Rule of Law, are less troublesome.

Caught between the Devil and the Deep Blue Sea, we should choose to get our feet wet rather than to submit the soul of our nation to the ravages of the Trump presidency.

Protect Mueller and move to impeach.

Posted by Aeneaus 'Nye' Babbage II at 9:09 PM No comments: 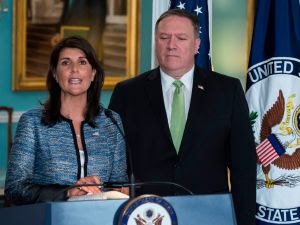 Drumpf's Amerikkka has left the UN Human Rights Council, stating that the Council did not protect human rights and in fact, shielded those nation who are culpable of human rights offenses. A perverted marriage of nonsense that would flabbergast Lewis Caroll, Franz Kafka and George Orwell combined.

Of course, it was, in reality, the UN's chiding of Israel for murdering Palestinians that actually provoked this lamentable action.

While the UN HRC has (to put it diplomatically) some rather dubious members - most of the nations which sit on the current council have putrid records of systematically violating human rights -  the purpose of the Council is undeniably a proper one.
A touch of bitter-sweet self-effacing satire is provided, however, by the publicly announced resignation.
To wit: By leaving the Council for these admitted reasons, the US is declaring that they have no enduring power and effect no influence on the structure or actions of the Council. Curious, that.

The 9 nations which the US - the wealthiest and most powerful nation in history - could not influence are (get this...) Burundi, Egypt, Rwanda, Cuba, Venezuela, China, India, Saudi Arabia and the United Arab Emirates. These are the member states which comprise the UNHCR as of Sep 21, 2017 (according to The Independent).

Egypt, Saudi Arabia, United Arab Emirates and India are all aligned with the US as allies. That's half the Council.
Moreover, Burundi, Rwanda and Cuba are on no one's list of most powerful influential nations.

One would rightfully figure that Cuba would align with China. Venezuela would be opposed to the policies on US on principle.
That makes a minority of 3 on a Council of 10 and Nikki Haley and the weight of the US could not sway or influence the UNHRC.

Twaddle, of course.
Smoke and strobe lights.
"Make America Feckless Again" seems to be the standing order of the Drumpf mis-administration.
Ineffectual, impotent, enfeebled and (the word of the hour) feckless.
Posted by Aeneaus 'Nye' Babbage II at 9:01 AM No comments: 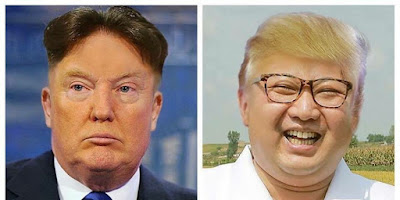 Question: Has the US ever formally recognized the Democratic People's Republic of Korea (DPRK)?

Answer: No... According to Quora;'North Korea, independent since 1948, is not recognized by five UN members: France, Israel, Japan, South Korea, United States; and one non-UN member: Taiwan. Seoul and the Republic of Korea claims to be the legitimate Government of all Korea.',

So... how can POTUS meet with the leader of a nation that the USA does not even recognize as legitimate? Do any treaties (or joint statements) have any legal merit at all? Or has all brouhaha and folderol been nothing but a shadow play?

Tonight on 'Celebrity Apprentice', Young Kim Jong-un, in his first appearance on LIVE global television will accept the challenge to stand toe-to-toe and jowl-to-jowl with a spray-tan dotard in a piss-stained wig of spun silk.

Thinking - dreading - that I might be experiencing the onset of arthritis, I went to see an orthopedic surgeon in his private clinic. I had no appointment but saw the doctor right away. I told him my concerns; he did a brief examination of my hand, testing flexibility and range of motion and sensitivity. He immediately wrote out a prescription for X-rays, a blood test and an analgesic for discomfort. He told one to go to the hospital and that he'd know more after seeing the X-rays.

So, off I walked to the hospital, a small private one, where I've been a patient. I register, pay my fee (more on that later) and am handed a series of vouchers after my national health care IC-card was read, the information gleaned and new data inputted.

One voucher was for the blood test; my number is called nearly as I pulled the waiting-number from the machine. Off I was sent to X-rays. I have barely enough time to call my wife to tell her I'm at the hospital for tests, when the X-ray tech beckons me to enter. Five minutes later, the X-rays taken (two views of both hands), I'm off to the pharmacy for my meds. I go directly to the counter, present my voucher and am given a packet with the prescribed analgesics in less time than one can say 'socialized medicine'.

Back I walk to my doctor's clinic where I'm forced to wait a full five minutes (harrumph) before I'm ushered into the examination room where I see my X-rays from the hospital visit displayed on the doctor's computer screen. The doctor has already consulted them and gives me the good news; all the joints of my hands are clear. There is no sign of arthritis. He then recommends a thrice-daily treatment of hot water soak followed by application of an analgesic gel. The accompanying nurses hand me tube of the gel and I head for home, a happier man.

All of this was accomplished in about an hour - the round-trip walk from the private clinic to the hospital took about twenty minutes.
As for the cost - the X-rays, blood work and meds cost NT$380; the private consultation with my surgeon cost me another NT$300 for a total of NT$680 which at today's exchange rate is...
wait for it...
$22.77US.
And I'm not even a citizen - just a registered alien.