Richard B Cheney: please, go back to your safe-room and await the US Marshalls 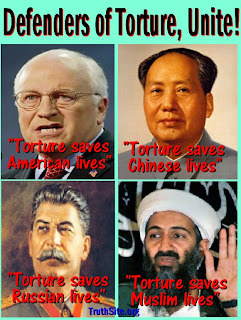 Cheney's claim that his policies saved lives and foiled terrorist plots reminds me of that joke about the person shredding newspaper in NYC to keep away the tigers. When told that there are no tigers in NYC, the person rejoins,'See how well it works?'

Although correlation is not proof (as this joke illustrates), the number of plots foiled by Cheney's administration by torture and rendition are few and laughable. The heinous acts that they committed are numerous and vile.

Cheney (and Addington, Rice, Tennant, et al) were caught so flat-footed by 9-11 that they went off the moral and legalistic deep end in a frantic attempt to 1) avoid culpability and 2) make political hay.

In Cheney's own words, they went to the 'dark side' which to me indicates that he was already quite familiar with the territory having been there many times before.
Posted by Aeneaus 'Nye' Babbage II at 9:41 PM