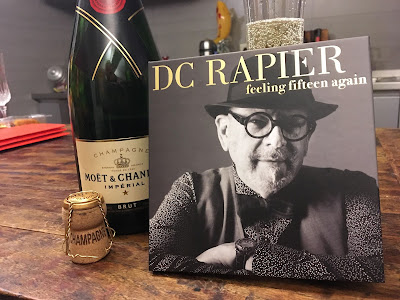 Okay.. for once this blog is NOT about Drumpfen-putz or his minions.
It's about my first solo album of original songs, 'Feeling Fifteen Again'.

After Woodstock, (yes, I went to Woodstock.) I left home in 1969 and went to Nashville to be a songwriter and make an album. Fifty years later and half a world away, I made my solo album in Taipei, Taiwan.
Here's how it happened...

In mid-September, 2018, I approached my friend, Andrew Page, about being my producer. He had worked as co-producer on Joanna Wang's album the year before in Los Angeles. They had used my home studio as a their rehearsal apace for about a month prior to recording. Andrew and I had had long talks about the enterprise and the pit-falls of the music industry. He and I had worked together on a number of music projects as pianist and as trumpet player.

His first question regarding this new project was a poignant one; 'Why do you want to do this?' A reasonable query as I was rather older, at 68, than your average aspiring pop star. I told him that I knew I had it in me to record an album of original songs and as a convenient short-hand, I told him that it was on my 'bucket list'. His second question was more practical; 'When do you want to do this?'
'As soon as possible.'

I gave him a thumb-drive of about two dozen songs I'd written over the past few years.
After some thoughtful consideration and further conversations, he agreed to produce the album and act as music director and play both keyboards and trumpet.
We began almost immediately to arrange the songs.

It was a most productive time; I wrote several new songs and re-wrote several others as we mapped out the untitled album. After about two weeks, we had fifteen songs to concentrate on perfecting. In the meantime, Andrew found and hired the players and booked the rehearsal rooms and the studio time.

We determined that the album would be 'old school'; recorded 'Live' for the most part, eschewing modern electronic sounds in favor of 'real' instruments. There would be no synth pads to simulate horns or strings. No electronic drums. No pitch correct. No auto-tune.

Andrew hired some of best players in Taiwan and we went into full-band rehearsal with Chuck Payne on drums, Cody Byassee on percussion, G.E. Anderson on bass guitar, Jacob Liang on guitar, lead by Andrew on his customized Fender Rhodes. A five-piece horn section, lead by Andrew on trumpet, consisted of Matthew Richey (tenor and alto sax) Josh Shaffer (tenor sax) with Alan Wang on first trumpet and me on bari sax and flute.
Additionally, we had two female back-up singers, Queenie Huang and Green Yang, complemented by G.E., Jacob and me on male back-up vocals. Mark Howe (guitar) rounded out the band; a large ensemble of twelve players.

The results surpasses all of my expectations. 'Feeling Fifteen Again' is an album of American music which spans several genres; country, rock, pop, swing, gospel. There's even a touch or two of jazz to be found.

It is a very personal album of songs; all written from life experiences - sweet, sad, bittersweet and joyous. In many ways, it is the story of my life written in short-hand and in outline form with editorial foot-notes and asides.