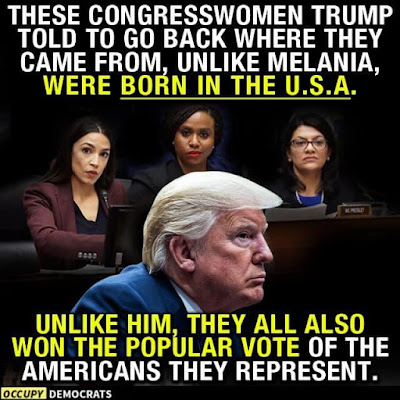 What President Trump tweeted about the four Congress-members was appalling in its blunt force racism. There is no rational way to dodge the base racism that Mr Trump expressed.

'Go back to where you came from!' is an age-old trope of xenophobia and racism. It was shouted at the Irish, the Poles, the Italians, the Chinese. It has been a slur shouted at nearly every single ethnic group which has ever come to the shores of North America and endeavored to make America their home.

Commentators of the media have been quick to respond by decrying Mr Trump's blatantly racist comments. That was to be expected. However, one aspect of their commentary seemed to miss the point that all members of Congress are, in fact, Americans. Whether or not they were natural-born or naturalized, each are American citizens. It matters not where their family came from. It matters not a whit that they or their ancestors came from Somalia, France, Italy, Poland, Ireland, England, Russia or Germany.

Mr Trump today double-down on his impudent impulse to express his inherent racism (Who can deny it now!?) by blaring 'Love it or Leave it!' during a press conference. (A press conference, mind you. Not during a stroll to Marine One. Not a 'gotcha' moment.)

When asked if he thought such openly racist sentiments were, indeed, racist, Mr Trump, inexplicably, tried to turn the tables and claim that anyone felt affronted by such racist tropes were themselves racist.