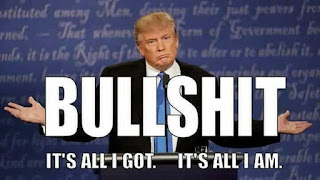 It’s been bandied about that Drumpf is the poster child for the Dunning-Kruger Effect (Google it). Actually, Drumpf is the leading exemplar for the Peter Principle whereby a person is promoted into their own distinct level of incompetence.

The irony is leaden with Drumpf, in that he’s never been competent at anything beyond the avoidance of repercussions for his incompetence.

He was, by accounts, a failure scholastically, but gained admittance to the Wharton School of Business, the wheels greased by Daddy Fred’s moolah.

He avoided the repercussions of his numerous business failures. (How does one go bankrupt owning a casino? How does one manage to do it three times?)

He’s avoided further bankruptcy by the Russian mob throwing millions at him in money-laundering schemes with the duplicitous mendacity of Deutsche Bank.

He was able to avoid charges of child rape and other sexual assault charges through the strong-arm, gangster tactics of his minion, Michael Cohen, and other more lawyerly deflection.


Through the vagaries of the Electoral College, the digital finagling of Fusion GPS and the Russian Troll Farm, Drumpf was promoted to his highest level of incompetency; he became the president of the United States, on office for which he is totally unfit and unsuitable to hold.

Congratulations Laurence J. Peter, the author of the Peter Principle, for this horrific validation of his theory, which observes that people in a hierarchy tend to rise to their ‘level of incompetence’.

Unless you’re a hard and fast MAGA-Moron, few would argue that Drumpf is as incompetent in his role as POTUS as he was as casino owner.

Now, it appears the poxy chickens are coming home to roost, at last.
Posted by Aeneaus 'Nye' Babbage II at 2:59 AM