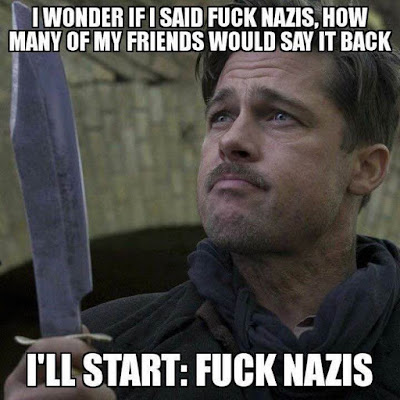 nota bene: In the following jeremiad, the terms Nazi and fascist are used generically and interchangeably. Moreover, the terms white nationalist, white supremacist and alt/right, are, for me, rightfully conflated with the terms, Nazi and fascist.

With the recent spate of bomb threats, the murder of the eleven in the Pittsburgh synagogue and increasing accumulations of hate crimes, I have been discussing the matter of the rise of fascism in the US and around the world. In response to the sight of the symbols of hate groups,  I have publically and repeatedly called for banning the public display of all Nazi insignia as well as the Confederate flags as hate crimes and open acts of sedition.

Surprisingly, I have received a lot of push-back from those Constitutional purists who clutch the First Amendment and Freedom of Speech as one does a magic cloak which protects all, no matter how hateful or deleterious their speech.
Bravo!
Hear! Hear!
And bullshit!

The presence of fascists in our society should be seen with the greatest of alarm. The sight of a Nazis swastika or a Rebel flag should  raise shrill klaxons of warning within our souls.
Fear! Fire! Foes!

(There should be absolutely no toleration of fascist in our society. More on that another time.)

The main bulwark of the naive citing of the First Amendment to defend the rights of fascists is the 'slippery slope' argument, which goes as follows; once the symbols of one group are banned there will be nothing to stop the banning of all symbols. Say good-bye, they say, to the Christian cross, the Masonic square and compass, the Golden Arches!
This might also be called the 'hair on fire' defense.

In response to that, one must first accept that the 'slippery slope' is one of the most insipid and invalid of false arguments. There is no slippery slope; all determinations of legality in a democratic society are controllable. As Reinhold Niebuhr asserts; Nothing is inevitable; not even the most probable.
There is no run-away cart. There is no slippery slope.
And your hair isn't on fire.
The other, less sophisticated response to the call to ban the symbols of hate, slavery and oppression is this: by making that call, I am, myself, being a fascist.
(The rubber and glue argument)

Being a fascist, on the other hand, is a personal choice. It is therefore, the choice to be a fascist (white nationalist, etc) which is repugnant, not the person. The person who embraces fascism become repugnant through the hateful actions of fascism.
I do not despise fascist for their ethnicity or their religion or their gender. I despise fascists because they have chosen to be fascists. My hatred of fascists does not therefore make me a 'reverse-fascist'.
As a point of fact, it is a moral imperative to hate hate, to detest fear-mongering, to deride and denounce fascism, bigotry and anti-Semitism. Anyone who tries to hedge their bets about fascism is ethically imperiled.]

Back to our story...

'But what is the point of banning these symbols?', asks the nice lady in the back, clutching her pearls and wringing her hands, patiently waiting for the side-bar to conclude.

The point, dear lady, is this; Banning the public display of these symbols deprives the fanatics of their own collective identity. Rallying to the flag of the Nazi regime (the black, left-handed swastika), white nationalists, who promulgate these malignant credos, feel bolstered and emboldened by being members of a larger group. There is safety in numbers, after all.

Ask the fictional Harvard symbologist, Robert Langdon. I'm certain he'd agree with me; by depriving the symbols to which group-members would rally, the group is no longer a cohesive group.  The unifying symbol of their ethos is gone and with it the unity of the group.

(If you don't believe Dr Langdon (ahem), then consult Joseph Campbell, who is, by far, the better source on symbology and the power of myth. (Seeing as he was an actual scholar...))

Quite true; the human mind - even one filled with hate - is an ingenious one. New symbols will be invented. Being deprived of a symbol, the leaders of the group will invent another symbol. Some of those are already on display at the rallies "of very fine people" who march with tiki-torches and promote racial and religious hatred.
(seen here)
https://www.adl.org/education-and-resources/resource-knowledge-base/hate-symbols

The new symbols are powerless. They will never have the emotional impact of the older ones because the new substitute symbols are not so deeply associated with the violence and egregious acts of the earlier group.

Consider: Most educated, informed people associate the Nazi flag with Hitler, the Holocaust, genocide, the Second World War, the destruction of Europe and the deaths of millions. Any new symbols of fascism would not have that dire association and hence would have far less emotional impact. They would lack the 'fear factor'. That dearth of emotional impact would be felt by the members of the fascist group, as well, and would be far less a unifier than the older ones.

So, my thought runs, that if, as a society, the USA were to ban the flags and symbols of Nazism and the Confederacy from public display, that would be a most practical first step to eliminating the hateful ethos that the symbols represent.

Mind you, that it is but a first step, not the solution.

(Epilogue: In Germany, where the display of the Nazi flag is a criminal act, the fascist have resorted to displaying the flag of the Confederates States as a substitute symbol for their fascist ideology. In Munich, the Rebel Stars and Bars hold considerably less power than, say, in Atlanta, Georgia, Richmond, Virginia or Oxford, Mississippi.)
Posted by Aeneaus 'Nye' Babbage II at 1:41 AM