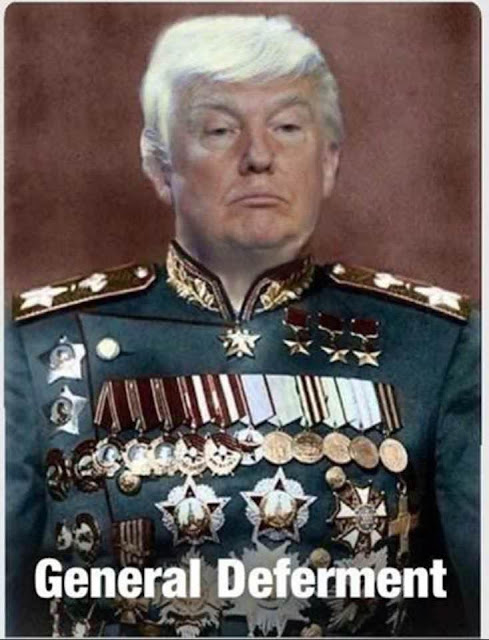 So, the Drumpfen-dunce finally went to a war zone.
Iraq... and set about dispiriting the troops by telling them that the USA was being unfairly abused and used to police the world.

"America shouldn't be doing the fighting... for every nation on earth." Quoth the Drumpfen-douche.

And then, to pour salt into the wound he'd just inflicted on their fighting spirit, he whined that the USA wasn't getting reimbursed in many cases.
Yes! He reduced the service of the Seals to a monetary transaction.

This is clear evidence that the man, Donald J. Trump, has no soul. Drumpfen-yutz, the Orange Autocrat, the Mango Mussolini wanna-be, the Amber Caligula considers that service to country is only respectable, valuable duty if the US is getting paid for it.
He has no soul.
He shed it long ago; traded for the insulating delusion that the world is here to serve his needs and for which he owes nothing in return but the simple benediction of his presence, the god-king.

Indict and impeach this POS.
NOW!
Posted by Aeneaus 'Nye' Babbage II at 7:43 AM