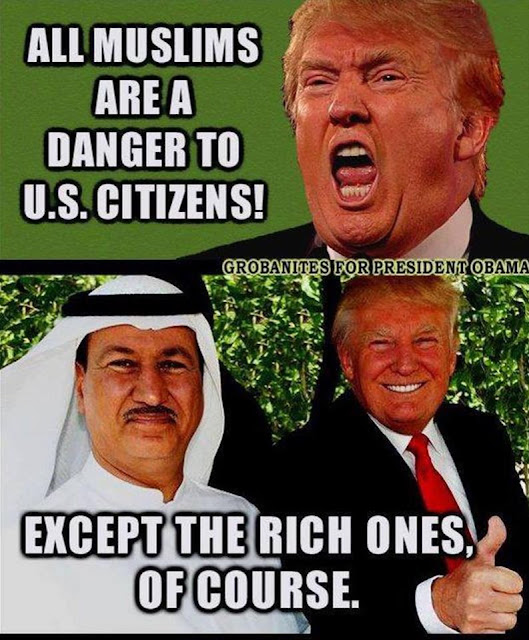 Jamal Khoshoggi.
Ring a bell?
A Washington Post reporter. US resident.
Wound up dead after an embassy visit.

The UN remembers. They investigated and found and confirmed strong evidence that Khoshoggi was murdered, dismembered and the remains of his hacked-up body were 'renditioned' to Saudi Arabia.

All of that grisly business was on the orders of the Crown Prince of Darkness, Mohammed bin Salman.

That's MBS to his friends. His friends include Donald Trump's son-in-law. Mr Trump is also very well-associated with the Crown Prince; the Prince who now stands accused of murder and dismemberment by the United Nations' investigation.

What is the White House doing about it?

Or is the would-be president too busy ginning up re-election support from his cult-members to bother? Or maybe it's the feuds he's carrying on by tweet with ...well,  just about everybody left of Joe McCarthy.

The US has no Defense Secretary. No Director of Homeland Security. No director of I.C.E. No director of F.E.M.A. And no White House Communications Director. And no permanent Chief of Staff. Which brings up the fact that there is no acting Director of the Office of Management and Budget.
Oh, and there is no Ambassador to the U.N.

With so much to do, it's easy to see why Mr Trump's White House would be taken unawares by this latest findings that incriminates the Crown Prince, MBS.

So much to do; so little time.
More than enough time for golf, though; an offense of form rather than legal substance.

Impeach the president.  He is at the least demonstrably incompetent and at most criminally,  liable or complicit in the commission of numerous felonies.

Felonies.
The President of the United States.

No one is above the law. Not the POTUS. Not a Crown Prince.
If Trump held any other job, he'd be in prison.

Impeach the president and end this travesty.
Posted by Aeneaus 'Nye' Babbage II at 5:26 AM