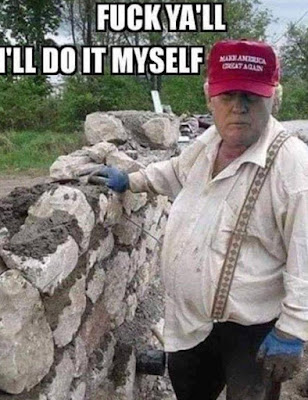 That man, Drumpf, has never done an honest day's work in his entire life.

Part of the cognitive dissonance of the MAGA Kult is that they respect hard-working people (in their way) and revile those they feel are slackers. Drumpf is the poster child for slackers, ne'er-do-wells and lay-abouts... plus he's a pathological liar.

He's the guy who'd take a 2-hour lunch and then insist he was doing inventory in the back on his own.

He's the guy whose drawer would be short every week and blame it on a temp who covered one of his over-long breaks.

He's the guy who would only volunteer for the softest of tasks and lollygag while others did the real work.

He's the guy who'd step in during the closing of a sale and expect to get part of your commission for doing nothing.

He's the guy who would pass along work to his co-workers that he had been assigned to do and then take credit for the job.

He's the guy who would eat your yogurt in the break room and put the half-empty cup back in the 'fridge.

He's the guy who would speak on behalf of the boss without any authority to do so.

He's the guy who went to his grandmother's funeral five different times coming back with a deep tan each time.

He's the guy who would steal the Krispy Cremes from the break-room.