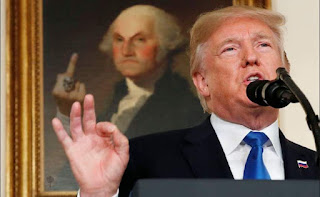 Drumpf is a con-man.
(No, this isn't a reprint of the previous post. It just cannot be stated and emphasized enough.)

He has skirted legality all of his life. His mentor was the notorious Mafia lawyer, Roy Cohn (of McCarthy Red-Scare infamy). He's never been on the 'up and up' when it didn't suit him and he has a well-deserved reputation amongst his fellow oligarchs for dishonesty and fraud.

It has puzzled me ever since his announcement to run in 2016; a decision which was seen as farcical, promising a 'Grand Guignol' of gruesome political buffoonery.
Why?
Why would Drumpf run?
Why jeopardize a gaudy, opulent, vain-glorious, vacuous life-style of extravagant ostentation so as to win the presidency?

Certainly, such a win would bolster his over-inflated ego. That is completely understandable; as a malignant narcissist and poster-child for the Dunning-Kruger Effect , Drumpf would be forever eager for yet another self-aggrandizing achievement. A defeat, on the other hand, would be devastating to mere mortals of overweening ambition.

My puzzlement remains this: with his host of high-priced and assumedly loyal attorneys, did none of them - or any of his cadre of advisors - point out that his disreputable past and his under-handed and out-right criminal dealings would come under scrutiny?

The Oval Office was designed to insinuate transparency; there are no dark corners to hide in. Skeletons in the closet are 'outed' and made to dance in the glare of public scrutiny. Special investigators over-turn every rock and sift the soil for corruption. Examples of such investigations are easy to reference. Heading the list are Nixon, Bill and Hillary Clinton, Gary Hart, etc.

Did not the extensive (and at times pathetic and comedic) interrogation of Hillary Clinton about the Benghazi tragedy and "her damn emails" give the Drumpfen-putz pause?
It should have.
But it didn't.
(Was he prompted by an agency other than his bloated, manic ego?)

Before even attaining the office of POTUS, he had hit his first legal obstacle; Mike Flynn as National Security Advisor. With juvenile contempt of all-things-Obama, Drumpf seemingly ignored the warnings by the out-going administration about Flynn's acting as an registered foreign agent. Drumpf, in truly Drumpfian fashion, then exacerbated that error by firing FBI Director Comey which drove him deeper into the rabbit hole from which emerged Robert Mueller's appointment as Special Prosecutor.
Mueller, the man who brought down the 'Teflon Don', John Gotti, is hot on the trail and has sniffed out the corruption and criminal conspiracies on which Drumpf has based his sordid and unscrupulous life. As a New Yorker who has rubbed elbows with the Mafia, Drumpf is keenly aware that his days are numbered. Let's hope that number is a small, rational one.

(p.s. That the GOP did not vet this bilious sack of offal before the RNC convention is one that leadership will rue until the party ceases to be.)
Posted by Aeneaus 'Nye' Babbage II at 12:18 AM