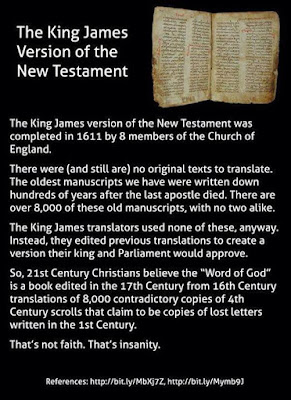 I agree with the sentiment that people of 'faith' should not be belittled for their faith.

Many people of faith are dear to my heart. Many are not.

In some way, I respect their dedication to their faith. It takes steadfastness and resolution to adhere to a belief system based on nothing but garbled Bronze Age tales told in archaic languages.

My respect is not endless, obviously.

My kith and kin who are of 'faith' are well-aware that I have no tolerance for starry-eyed proselytes and proselytizers. If there are discussions involving their activities at their place of worship, I remove myself to a place out of earshot.

Rarely are there discussion about articles of faith, but I have been known to undertake the role of devil's advocate in arguing against the nonsense found in 'holy' books and accepted by those of 'faith'.
It's a wonderful mental exercise but very tiring.
I used to entertain myself by talking - willingly - to Jehovah's Witnesses and Mormons; the most active proselytizers of the day. I felt it was an obligation to at least present a viewpoint contrary to their dogma, if not for the proselytizer's, then for my benefit.
Not magnanimous but simply dutiful.

On one occasion, I invited a visiting pair of Witnesses to come into the parlor. (Odd how they travel in pairs - as if one cannot exist without a supporting 'other'.) It was dreadful mistake, as they simply wouldn't leave once I had tired of their intractability. I had to become quite rude; finally lying about a pressing engagement to induce them to go.

My roommate pointedly warned me that that should never happen again. From then on, I chose the stalling tactic; never allowing the door to open more than half-way. In effect, it was an unfulfilled invitation for them; I was conversing, their initial goal was achieved, but the implied promise of access was unfulfilled.

Since that time of youthful frivolity, I have become less willing to exert the energy needed to swat the flies that swarm around people of 'faith'. Willingness to engage has cooled to a willingness to tolerate.

Just so long as that person of 'faith' does not try to shove it down anyone's throat, my throat...  Fine.
Stew in your own juices.
Live and let live

I think that sentiment is shared by many.