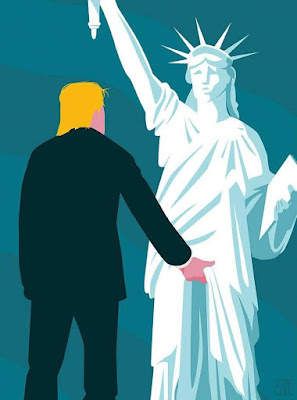 Those representing the Republican Party must be encouraged and induced to consider the health of the state of the Republic over narrow party interests. It is in the interest of the GOP and the nation to protect Mueller's investigation and then to act to impeach the President for crimes and misdemeanors in accordance with the Constitution.

There is little doubt that Mr Mueller is uncovering and verifying multiple crimes which Donald Trump has been part of and privy to. These crime most likely include; money-laundering, racketeering, various violations of RICO, conspiring against the US, acting as an unlicensed foreign agent and actively and intentionally obstructing justice, witness tampering and aiding and abetting the crimes committed by Trump's associates and family members.

Write to your representatives in gov't at state and the federal levels; Senators and Congress-members.  Inform them that their standing by while Drumpf, his minions and Russian apparatchiks despoil and undermine the American Republic is NOT acceptable and that they will pay the price of being removed from gov't.

They'll want to protect their phony-baloney jobs. So, it's in their own best interests to protect Mueller's investigation and then to act to remove Drumpf from office as expeditiously as possible.

Drumpf will not go gently... It will require immense and persistent political will from the grassroots to bolster the back-bones of gov't reps and galvanize their concerted efforts in this vital regard.

Contact your reps every day by using Resistbot ( https://resist.bot/ ) or some other app or program - pen and paper are great but social media and phone calls are far more direct and carry more immediate weight.