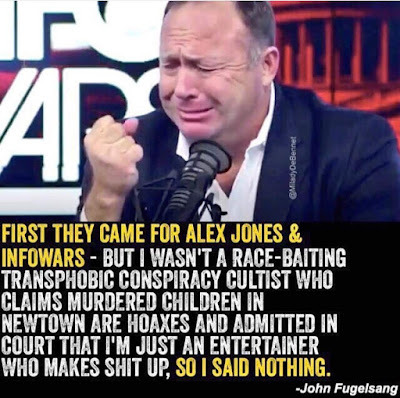 To start out with, Alex Jones is a daft prat.
Poor little snowflake doesn't have a global platform to spew his hate-filled insanity? Gee, too fricking bad. He can speak any time he wants just as much as the rest of us.
This twaddle about his 'rights' being denied ignores the concept that corporations have the privilege to deny service to those who do not meet and fulfill the conditions of service. It's in the user agreements which we all sign onto but never read.

This denial of service is not being forced by judicial decree or executive order or by act of Congress. Those who don't like the decision made by those corporations which have denied poor little Numpty his soap-box, please write to them and stop whinging about this rancid, flatulent arse-wipe.

Sure, defend Jones's right to barf up his 'opinions' but then try extricating yourself from the defense of his sociopathic delirium.
Let's see how that might work...
(Really, you support this fascist, racist sack of offal because...?
What? Patrick Henry?
'No... but, but, but...'; the motorboat defense.)
As a society, we cannot, we must not condone the insanity which is fascism. Don't talk 'slippery-slope' to me. Nothing is inevitable; even the most probable. We're not talking about plate tectonics or planetary motion, here. Social policy is determined by a democratic society. We have already determined that hateful, hurtful, harmful actions are not tolerated.

Beat your dog. The law will come down on you.
Little Numpty the Blow-hard cannot be allowed to light his hair on fire and scream the 'N-word' at the top of his lungs. Sorry, that is not acceptable behavior from a human - especially a grown-arsed man.
It is intolerable. It cannot be tolerated.

Being intolerant of destructive behavior does not mean that our society is illiberal or standing in contravention of the professed right of free speech. It indicates that there are limits to what is acceptable. (Again - the slippery slope holds no traction as an argument.)
There are consequences for the misuse and abuse of privileges and rights. One might have the right to own a gun or a chain-saw but one may not use it to commit injury to another by willfulness or by accident.

The Bloviating Numpty in question has abused his platform. The corporations which supplied that platform have determined that Jones had violated the conditions of their agreement.
'Nuff said.

He has also abused his right to speak freely and openly, IMHO, because he is not using his Right in a responsible manner. He spreads falsehoods to support a hateful agenda; an agenda upon which he has built a business plan to enrich himself. Jones is not the prophet in the wilderness, ranting. He is a self-absorbed, self-serving twat of a con-man who is bilking people of their money and consciously, earnestly promoting a divisive and corrupting ideology.

In his own defense, he has proclaimed himself a 'performance artist'! (Talk about putting lipstick on a pig and polishing a turd...) If his 'performance' included doing bodily harm to anyone or anything, he would have been stopped long before now. His 'performances' have been, without question, harmful to the society.

Calumny. Slander. Hate speech. Calling 'Fire' in a theater. None of these forms of 'speech' is protected as a civil right. Numpty Jones's 'performances' meet the definition of those terms of unacceptable and unlawful speech.
Again for those sitting in the back - Numpty's loss of a soapbox to his liking was not the result of government policy. His loss of platform is due to his odious behavior over the course of too, too many years.

Moreover, what Numpty is really bemoaning is his loss of income from his con-job. 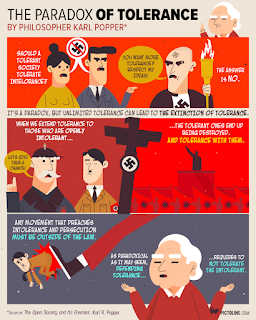 So much inspired with the documents you have shared. Thanks a lot, this was much useful and handy. Battery is the only source that assists to prevent us from the power demanding time, so choice of your battery should give at least minimum power consumption so better to buy your batteries & inverters from the battery authorized dealers. Inverter Battery dealers in Chennai