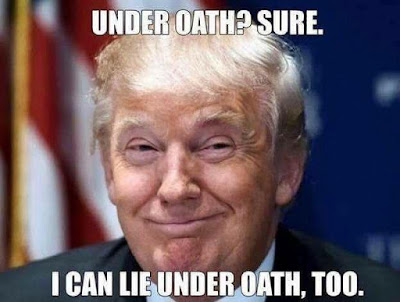 There are two basic ways of telling a lie. The first, most basic is to invent a story that is learned by rote and recited by all participants in the lie. Nothing changes in the false narrative; it is boiler-plate and iron-clad - simple direct and stubbornly adhered to by the conspiracy of liars.

The second method of perpetrating a lie is to start with the boiler-plate but, when continued inquiry proves the lie less than substantial, the false narrative must change to address the unforeseen hole in the story. This is the proverbial 'can of worms'; the lie must be continually changing as the enquiry becomes more demanding of details not covered in the previous lies.

We have witnessed both of these variants utilized by Trump and his minions regarding the Trump Tower meeting with Russian agents in 2016.

It matters not a whit how the false narrative morphs. The matter of importance is that the narrative as presented by Trump and his family is a false one.
The president lied.
His son lied.
His son-in-law lied.
His campaign manager lied.
The White House spokesperson lied and they all continue to lie, prevaricate, obfuscate, dissemble, deflect and utilize all of the tactics of lying.
If conspiracy against the USA with a foreign adversary is not considered a 'high crime and misdemeanor' then, what is?