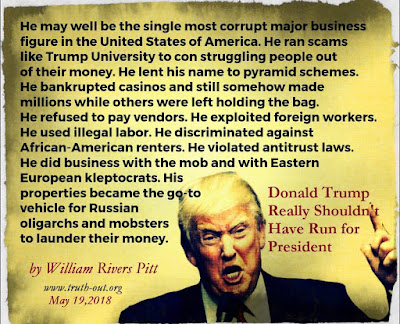 Tweet after tweet, Trump proves himself for what most of Americans have known for decades; he's an unhinged individual who is ignorant and self-centered to a very disturbing degree. As the walls close in, his grip on his precarious mental and emotional state keeps slipping. To wit:
Don McGahn, White House Counsel, testified to Mueller's team for more than ten hours.
John Bolton is now connected through the NRA to the jailed Russian operative, Maria Butina.
Michael Cohn, Trump's personal fixer is on the block, awaiting his subpoena and/or indictment.
Manafort is on a knife's edge while a jury deliberates; with yet another trial already scheduled for September.
Roger Stone is, by all appearances, about to be indicted for conspiring with Julian Assange to obtain stolen documents from the DNC; documents stolen by Russian hackers.
Rudy Guiliani has gone completely bonkers on national television decreeing that "Truth is not the Truth." (If such is the case, then why have a legal system with lawyers, judges and juries at all?)

In short, the wheels are coming off the Trump train at an alarming rate and Trump is sounding the alarm with more and more delirious tweets at an increasing frequency. Never before have the American people and the world witnessed a POTUS sink into the abyss of madness.

All of this makes Watergate and all other DC scandals seem like tedious parlor games. Congress must not allow this ruinous farce to continue. One can only surmise that the members of Congress are complicit in crimes Mr Mueller's team is investigating and are therefore endeavoring to forestall the inevitable collapse of House Trump.