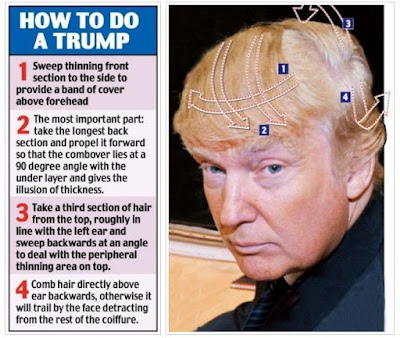 I got to ask once more...
How much time (and money, our money) does Drumpf spend every day getting and keeping that impossible gravity-defying hyper-comb-over in place every day? He must have a team of hair-dressers and make-up people working in shifts, hovering around in case there's an errant breeze is sent by his enemies to un-coif him.
Damn Obama and his Soros financed breezes.
It's pathetic - Drumpf's security blanket is his ridiculous hair. He's an insufferably conceited, arrogant Linus who wears his Binky on his head.

Calling out to some intrepid and hungry journalist - go after this story.
Seriously.
It's been pooh-poohed as a trifle since the campaign; Trump's hair, LOL!
Meme of the day.
We shall over-comb, wombat-wearing cheeto bit of dismissive banter.
But...
There is a story here. How big depends on how much and how many?
How many people are employed by the White House to service Donald Trump's personal appearance?
He's vain beyond the imagining.
Narcissus would envy him his vanity.
How does the size of the staff assigned to 'The Donald's' look compare with other presidents of the modern era? I would surmise that it compares to Reagan's. The size of Reagan's staff (pun intended) was the benchmark used, no doubt.
St Ronnie was a show-biz construct, like Drumpfen-putz, but less narcissistic.
He was nuts.
Conceited.
Delusional.
But Ronnie wasn't on the level of self-adulation which Donald shares with no one.

That fact established, then, how many people would he hire on the public's dime to tend to his 'do and his spray-on virility?

How much money is spent every day on the staff salary, transportation, office space, appliances, supplies, remedies, perhaps even heart-attack hair pieces...?

Whoever decides to follow this with investigation journalistic vigor, could write is as comic piece. Ha-ha You thought his golf outings were a drain on the budget? Take a look at this scandal.
It's hair-raising!
LOL!
emoji-chain...
#nobutseriouslywtf