Ask and You Shall Receive (offer void were prohibited) 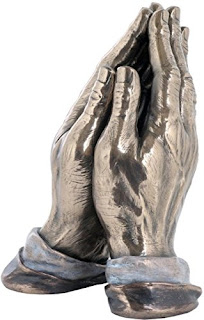 A new irony to add to a growing list: Evangelical Christian paranoia of Facebook and Google algorithms.
Allow me to spell this out...

Here, we have firm, unshakeable people of 'faith' who hold as a core tenet of their belief that the deity they serve is an all-knowing  being. Should any of them have a request for good fortune or good health, guidance in troubled times, a need for a sign from the 'heavens' to lead them on the path of righteousness - to act in accordance with the will of their deity - they ask their 'god' through prayer, directly. They cast their 'bread upon the waters', so to speak. They may consult a 'man (or woman) of 'god' who will lead them in prayer and assist in the supplication for assistance from their omniscient deity. Then, following their supplication, they keep their eyes peeled for any omen or portent which might betoken an answer from the 'divine'. Sometimes, if the bodement isn't clear, the 'believer' will consult another member of the 'faith' or a person of the cloth to augur the deity's pronouncement.

In a nutshell, they speak to the wind and wait for answer from the Aether.

However, they are aghast that search engines and social media; Facebook, Google, Yahoo!, YouTube, Tumblr, Instagram, Bing, Pintrest, Reddit, Snapchat, Digg, blah-blah-blah, and the disembodied digital entities such as Siri and Alexa,  not only provide immediate answers to their inquiries but can predict what other questions and interests the cyber-supplicant might find of interest.
(Apparently, their deity does not provide this service.)

One believer wrote, "It was so eerie to have a conversation about something and then have ads pop up during web searches that were like the experience I've had when I searched for a product or service on the internet. I thought it was just a weird coincidence or that I had searched it and forgotten. But it's been confirmed that Facebook was listening."

Oooh! Booga-booga! The ghost in the machine is real! Hide your babies!

Perhaps, 'people of faith' know that the code-writers, who build the platforms upon which the search engines and social media sites operate, utilize algorithms which can 'foretell' the likely needs of the cyber-consumer based on past inquiries. (If you inquire about a specific movie, the algorithm then tabulates the probability that you might also be interested in the director or the actors in the film or in other films of the same genre or auteur. )

But, I find it very strange that such people of faith would be perturbed - even panic-stricken - by the smooth and instantaneous provision of their digital requests by algorithm. They clearly glow in renewed confirmation of the faith they place in their deity when the most vague and ill-defined portent or most serendipitous happenstance occurs to which they assign divine significance.

Cause and Effect - if you ask Google for a list of Sam Kinison's movie appearances, you get what you've asked for in the blink of an eye. Ask Amazon.com to send you a digital copy of the complete works of Rudyard Kipling and it's delivered to your Kindle or other reader in a trice. Ask Facebook to block some Trumpian know-nothing and it's a fait accompli before you can say, 'Impeach the Putz!'.

Ask and ye shall receive... with applicable charges and fees.

Try any of the above requests with the your choice of deity/deities. I dare say you'd go without the information, the reading material and the relief of being disassociated from a nincompoop.

'God does work in mysterious ways'.

So does Google, but you'll actually get what you've asked for, no question, no prevarication, no delay, no blind faith involved.
(Before somebody suggests that folks display 'blind faith' in Google or Amazon.com (for instance) I'll insist that they're wrong. Purchasing a book on Amazon requires no faith, at all, at all, at all. One must only contend with a reasonable degree of confidence that the company will comply and fulfill one's order. This confidence is based on logic; Amazon.com will act in its own best interests. Those interests and their business plan is based on consumer satisfaction.  If Amazon.com failed to deliver, then its reputation as a reliable retailer would be harmed and Amazon.com would cease to be a viable retailer.
Faith plays no part in it. The act of buying from or through Amazon.com requires only rational thought and logical thinking based on evidence... and a credit card, of course.)

In God we Trust - all others pay cash.

Yet 'people of faith' (one of whom I've quoted above without attribution) do not trust the algorithmic processes which drive Siri and Alexa, search engines and social media sites even though they work quite efficiently. In fact, 'people of faith' see such algorithmic workings as somehow nefarious, sinister and menacing because the mathematics can anticipate requests.

Oooh...  back to that creepy feeling. Dark arts and demons!

'People of faith' would rather mumble to an imaginary friend and accept 'on faith' that their request will be heard, understood and fulfilled despite all evidence to the contrary.

Pointless...
I know because I asked for a red bike for Christmas in 1955 and I am still awaiting delivery. Maybe 'god' should  talk with Jeff Bezos about upgrading the heavenly order compliance system.