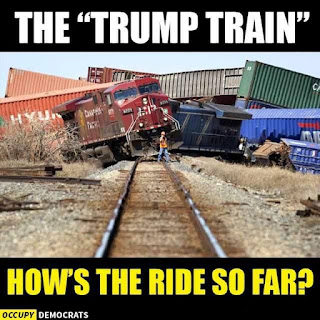 POTUS is under criminal investigation.
The VP has done a David Copperfield.
There is no Secretary of State.
The Attorney General is a suspect in a huge, growing investigation from which he is recused and is constantly under threat of being fired.
The Assistance Attorney General will also most likely be fired.
The Senate Pro Tempore is quitting.
Lyin' Ryan, Speaker of the House, has announced his retirement.
The Chief of Staff has been effectively made redundant.
The heads of most the Departments and Agencies are gung-ho to destroy their little fiefdom in the government and the rest of them are, at best, competent in corruption or outright stupid.

Oh, did I mention that the new National Security Advisor would like nothing better than to have a senseless, bloody, endless war named after him?
Posted by Aeneaus 'Nye' Babbage II at 8:16 PM