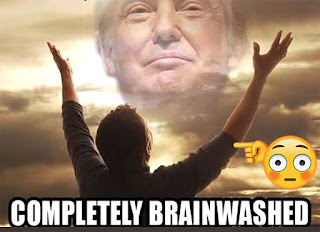 Obama was no saint. I doubt there has ever been a politician who was truly saintly (although many try to play one on TV), but he wasn't the utter, contemptible villain that Drumpfen-dork has been all his life. He's been sued 3,500 times. That is unprecedented (yes, unprecedented...)
https://www.usatoday.com/story/news/politics/elections/2016/06/01/donald-trump-lawsuits-legal-battles/84995854/

As the editorial board of the New York Times wrote in the on-line publication on April 10, 2018;
'Mr. Trump has spent his career in the company of developers and celebrities, and also of grifters, cons, sharks, goons and crooks. He cuts corners, he lies, he cheats, he brags about it, and for the most part, he’s gotten away with it, protected by threats of litigation, hush money and his own bravado.'

Drumpf is a con-man of very low character. The fact that he hasn't killed anyone outright (that we know of... yet...) is one of the few positive things one could say about this tawdry, tasteless, shameless excuse for a human being.

Now, he's playing the biggest con of his life.

This will all be historic.
His campaign, his election, his administration (filled with vile swamp monsters, sociopaths and ne'er-do-well, blackguards, loafers and churls), his legalistic finaglings and dodges, his contempt for the US legal system, his brash defiance of the Constitution (and his oath to defend it) his escape from prosecution and his exile.

He's doing a smash and grab on a grand scale.

Watch him bolt to Moscow when the indictment come down. He has his own plane, after all...