The Company He Keeps

“A man is known by the company he keeps.”― Aesop
So saith the wise man. 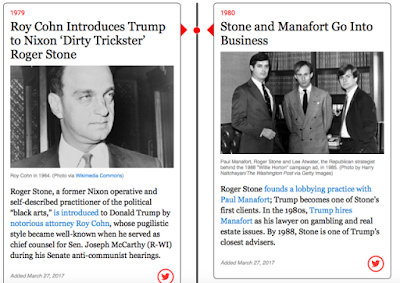 Whose company has our current occupant of the White House kept over the years? The company of wise counselors? The companionship of doughty, honest people of staunch character and steadfast integrity? The camaraderie of learned scholars and acknowledged academicians? Indeed, has Drumpfen-putz ever enjoyed association with esteemed comrades and leaders of Science, Art, Education, Philosophy or Diplomacy?
Hard to say...
Maybe in passing...
Perhaps a notable personage (such as Alan Dershowitz!) and Drumpf  both attended a cocktail party follow-on to a movie premiere which lead-up to an after midnight orgy. (More on that later in the broadcast...)
Who's to say?
What can be said irrevocably and without reservation is that Drumpf has kept company with a most nefarious, low-life cast of characters.
Here's a short list. I'll leave out the current positions of each as related to the gargantuan kerfuffle that is the current state of affairs. Most of these creatures have been interviewed by Team Mueller, the Wimps in the House and the Gang of Grandpas in the Senate. A couple have been indicted.

The only one not presently under investigation, in all probability, is Roy Cohn. Roy is not on the list for the simple reason that he's been dead since 1986. Otherwise, he'd probably have Gorsuch's Supreme Court seat.
The dramatis personae:

Roy Cohn;
Roy was the young Trump's mentor. Cohn was the right-hand man, chief counsel and instigator for the infamous Red-baiter and violator of Americans' civil rights, Senator Joe McCarthy. Roy was disbarred for "dishonesty, fraud, deceit and misrepresentation" by the State of New York.
Cohn was also a fixer for the Mob.
The Drumpfen-dork openly and pridefully crows his mentoring with Cohn, much as a student of Jascha Heifetz might cite the Maetro as his teacher.
Drumpf, as POTUS, has been heard lamenting that he didn't have Roy to turn to now. There's good, creepy movie about Roy as played by the comparably creepy, James Woods, called 'Citizen Cohn'.
https://www.washingtonpost.com/archive/politics/1986/06/24/roy-cohn-is-disbarred-by-new-york-court/c5ca9112-3245-48f0-ab01-c2c0f3c3fc2e/?utm_term=.cde0de105c09
https://www.vanityfair.com/news/2017/06/donald-trump-roy-cohn-relationship
Paul Manafort;
Manafort has been an on-again, off-again fixture for most of the professional life of the Drumpfen-putz. Manafort's law firm did many of the tasks that Michael Cohen later would do as a fixer for Drumpf.
Roger Stone (more on him in a second) was a partner in a lobbying firm with Manafort and Lee Atwater. This team of weenies perpetrated the 'Willie Horton' campaign which sunk what little chance Dukakis had against Reagan.
Manafort worked for other notorious Ukrainian and Russian louts as such Viktor Yanukovych, Oleg Deripaska, Konstantin Kilimnik and Dmitry Firtash.

Roger Stone;
(Full disclosure; of all the villains on this list, I harbour a particular resentment for this dung-eating, atavistic pestilence in quasi-human form. Can't really explain it. Perhaps I was frightened by an albino lemur as a child.)
...ahem...
Roger Stone was introduced to the young Donald when both were journeyman scum-buckets seeking that one big score that would propel them onto a life of profitable dirt-baggery; real estate scams, influence-peddling, dirty tricks, fixing, muscling,  fraud, embezzlement, etc... white-collar crimes.
You know... for smart white guys.
Stone made his political bones working on the Nixon and Reagan campaigns. The Willie Horton propaganda was promulgated by Stone with Manafort and Lee Atwater.
Fun fact: Stone has a larger-than-life portrait of Richard M. Nixon tattooed on his back.
https://www.nytimes.com/2017/03/21/us/roger-stone-donald-trump-russia.html

Sam Nunberg;
Sam is a loser's loser. He's a hanger-on - a sort of lamprey to Stone's slithering shark act. Hired and fired several times by the 'stable genius', Drumpfen-squat, Nunberg has a kind of 'genius' for pissing off his associates. A self-proclaimed life-long buddy of Roger 'the Alien/Lemur' Stone, Stone has called him a coke-freak in public.
Sam was sued by Drumpfen-shite for violation of an NDA (...funny that Drumpf has so many signed those things, ain't it?), worked for Mitt Romney and endorsed (ugh) Ted Cruz(!) after Drumpf fired him from his campaign.
Infamous for his racist remarks, Sam called Al Sharpton's daughter a 'N---' and said Barack Obama was "a Socialist Marxist Islamo Fascist Nazi Appeaser".
(Whatever the feck that means, he didn't mean it as a compliment.)
https://edition.cnn.com/2018/03/05/politics/who-is-sam-nunberg/index.html

Felix Sater;
Felix Sater is that seedy, unsympathetic character in a cheap detective story; the snitch that nobody likes and everybody would like to see face-down in a ditch somewhere.
Felix worked for the Mob before becoming a cooperating witness (stoolie) for the FBI, 'having pled guilty in 1998 “to one count of racketeering for his role in a $40 million stock fraud scheme involving the prominent Genovese and Bonanno crime families, according to court records...'
(Talk about leading a dangerous life!)
His Drumpfen-schmuck connection was through Bayrock Group, a real estate investment firm, which set up financing for Drumpf properties including Drumpf's interrupted wet-dream; a Trump Tower in Moscow.
Sater held the position in the Trump Organization of 'Senior Advisor to Donald Trump' with a personal email address (@TRUMPORG.com), his own office phone and fax number although Drumpf, himself, stated that he wouldn't be able to identify Felix if he sat down to lunch with him.
Felix was born on the road to perdition; his father Mikhail Sheferovsky, was a longtime underboss within the Russian Mogilevich Organization. (i.e. the Russian mob).
Felix's preferred method of criminality is fraud; bank, real estate, stock... but...
In a Midtown Manhattan restaurant in 1991, Felix stabbed a business rival in the face and neck with the stem of a margarita glass, broke his jaw, lacerated his face, and severed nerves, creating a wound that required 110 stitches. Sater was convicted of first degree assault and serve 15 months before being paroled.
It seems he wasn't sufficiently rehabilitated as he was later convicted of fraud in a penny-stock scam.
All in all, a real sweetheart if you'd consider Lizzy Borden your soul-mate.
https://medium.com/@JamesFourM/trump-putin-and-the-mob-part-6-trump-felix-sater-and-their-ties-to-mafia-don-semion-mogilevich-34d4a5a83d72

Michael Cohen;
Michael Cohen is Drumpf's low-grade consigliere - his lawyer for when a lawyer has to do unlawful stuff.  Cohen's brash, bullying demeanor and thug-like style is well-documented and has earned him the unseemly cognomen, Trump's Pit-bull'. Cohen levels the threats that 'Cadet Pussy-foot  J. Bone-spurs' doesn't have the marbles to deliver himself. Basically, Michael is the schlemazel to Drumpf's schlemiel. He has to clean up the messes that Drumpfen-yutz makes wherever he goes.
It's a living...
In January 2017, Felix Sater introduced Cohen to a Ukrainian lawmaker, Valentyn Ogirenko, with a proposal for US policy for the region, which Cohen presented to Drumpf's disgraced Nat'l Security Advisor, Michael Flynn. Cohen has denied passing the info along, of course.
Cohen and Sater also met with Ukrainian lawmaker, Andrii V. Artemenko, in NYC about US policy toward Russia's invasion and annexation of Crimea.
Ironically, Cohen worked on the Michael Dukakis presidential campaign which Atwater, Stone and Manafort helped scuttle.
http://www.businessinsider.com/michael-cohen-history-with-trump-2018-3
https://www.theguardian.com/us-news/2018/mar/27/michael-cohen-who-is-trumps-pugnacious-and-loyal-lawyer-

This just in from WNYC and ProPublica on Mr Cohen. His roots in Queens, Long Island and Brooklyn. Coincidentally, the article is entitled 'The Company Michael Cohen Kept'.
https://www.wnycstudios.org/story/trump-inc-podcast-company-michael-cohen-kept/

Jeffry Epstein:
Saving the 'best' for last.
Jeffry Epstein was Drumpfen-grabber's party buddy. Epstein specialized in providing under-age girls to his guests at his infamous sex orgies. His parties were attended by the glitterati of shit-heels and included, along with Drumpfen-schvantz, Bill Clinton, Alan Dershowitz and members of the British Royal Family. (no pun intended).
Drumpf, himself, is on the witness list for a civil trial against Epstein by one of his victims, who was 15 at the time of her sexual assault.
It was alleged that Epstein molested more than 40 under-aged girls between 2002 and 2005 at his Florida mansion, near Mar-a-lago. Jeff pled guilty to two counts; solicitation of prostitution and soliciting a minor for prostitution. He served 13 months in a county jail and paid financial settlements to many of the roughly 40 women the FBI deemed to be his victims.
Interestingly, Epstein’s personal phone directory had 14 phone numbers for Donald Trump, including emergency numbers, car numbers, and numbers to Trump’s security guard and houseman.
About his party-host, the Drumpfen-douche had this to say in an interview with New York Magazine:
“I’ve known Jeff for 15 years. Terrific guy. He’s a lot of fun to be with. It is even said that he likes beautiful women as much as I do, and many of them are on the younger side. No doubt about it, Jeffrey enjoys his social life.”

Quite a group of grifters, sharks, fraudsters, shysters, hustlers, fixers, ne'er-do-wells and convicted sex-offenders to be hanging out with over the years.
There's not a single one I'd willingly invite into my house nor whom I'd trust to tell me the correct time.