Paul Ryan and the Oldest Lie in the Book 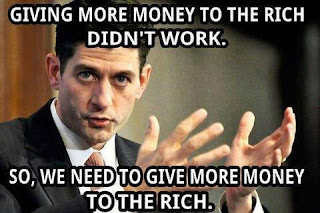 Paul Ryan will not be seeking re-election to the House. (Hurray!) He's quitting to 'spend more time with his family'.

Quitting to 'spend more time with family' is one of the oldest lies in the book - right after 'the check is in the mail' and 'I won't come in your mouth'. It's the standard weasel-phrase for politicians who have been disgraced by scandal.

Ryan is just jumping the gun a bit by mouthing the old saw before his scandal is revealed publicly. He's not quitting to 'spend time with his family' - not unless his wife or one of his kids is a 'white-shoe' attorney specializing in criminal cases.  No, Paulie will be spending time working on his legal defense to avoid prosecution in the conspiracy to obstruct justice (amongst other charges) which the Mueller investigation has uncovered.
What will the actual charges against Lyin' Ryan be? Good question. That, dear reader, is, as President Drumpfen-putz so deftly puts it, a 'wait and see' issue. Indications from a number of sources are that the GOP received millions from foreign nationals to fund various political campaigns. Some of the funds, evidently, were laundered through the NRA. With Mueller and team playing everything so tight to their vest, we have to await indictments and subpoenas to know more.

(Advisory: read the Palmer Report by Bill Palmer for loads of little scoops the MSM don't pick up until days, weeks or months later.)
http://www.palmerreport.com/
Paulie is running scared - that's why he's not running for re-election.
(Ironic, ain't it?)
His skinny arse is in the wringer. All that's required is for Mueller to start cranking the rollers and Ryan will start to squeal and none of the Koch Brother's dirty money is going to save him. One thought is that Ryan's quitting helps set the stage for the Dem retaking of the House and thence the filing of impeachment against the Drumpfen-furter and his cohort of de-constructionists.
Any bets on his flipping against anybody and everybody within reach to save his putrid behind from the Graybar Hotel?
Posted by Aeneaus 'Nye' Babbage II at 9:12 PM