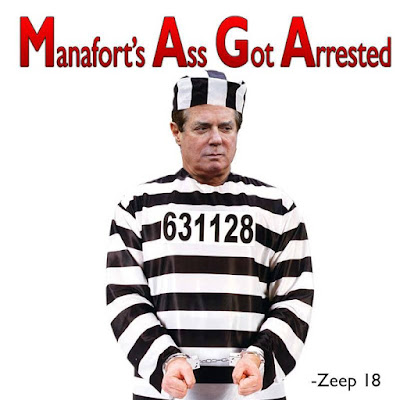 "He is not a fake president. He was elected. I wish people would stop that nonsense." (an actual post on FB...)

Nonsense? It has been proven that Russia swayed the election.. Fewer than 80,000 votes made all the difference in Wisconsin, Michigan and Pennsylvania. (Moreover, Drumpf won 18 states by fewer than 250,000 votes in total. Hardly what anyone could consider a mandate.)

The GOP strategy changed abruptly from their focus on the 'Red States' to the three already mentioned which were thought to have been a lock for HRC. That abrupt change in strategy and the concomitant increase in TV ad buys followed the hacking if the DNC and Drumpf's oft-repeated public plea for help from the Russians on HRC's fricking emails.

The GOP knew the Dems game plan and did an end-around with the help of Guccifer.2, Roger Stone and the Russian hackers. Russian 'bots' also undermined support for the Dem nominee by spreading disinformation - an old Russian propaganda ploy.

Manafort, Drumpf's campaign chair, is in jail awaiting two trials; trials which will further reveal his corruption and its influence on drawing the Kremlin into the 2016 campaign.

Moreover, the Russian spy in the NRA, Maria Butina's role in corrupting the US electoral process is just being revealed. We'll learn more at her trial. It appears that she is ready to flip already.

Hardly. Drumpf - who did not win the popular vote -was elected by a technicality which was exploited by the criminal interference of the Kremlin with the assistance of the Drumpf campaign and the GOP leadership. (That will also come to light as Manafort, Gates, Page etc start to throw folks under the bus to save their own sorry arses.)

Calamity? Yes, but not nonsense.
Posted by Aeneaus 'Nye' Babbage II at 3:50 AM