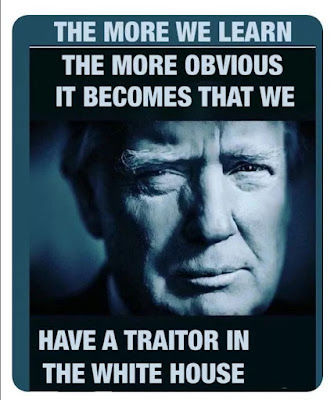 Well, there it is; the 'Helsinki Moment' - the turning point from which there is no turning back. Donald J. Trump has chosen to side with a foreign adversary over the government he swore a solemn oath to protect and defend.

If anyone still needs convincing that Trump is putting 'America First', that person has drunk deeply of the poisoned Kool-aid  and beyond hope of hearing the truth. Any palaver about forging a better relationship with Russia is a feckless fiction, an irresponsible prevarication. It's tantamount to suggesting that the rape-victim should just lie back and enjoy the experience. There were also elements of Chamberlain's woe-be-gone pronouncement of 'Peace in Our Times'.

One does not 'make nice' with dictators and despots, no matter the 'optics'.
One does not suggest that Jack the Ripper should assist in exploratory surgery.
Trump has suggested as much publicly; Putin should help with the Mueller investigation into Russian meddling in the American electoral process. (!)

We can only imagine with horror what transpired between the two inveterate liars in the private two-hour meeting. As bits and pieces of that prolonged exchange comes to light, we will no doubt be shocked and appalled.

It is long past time to end the travesty of the Trump presidency.
Protect the Mueller investigation.
Move to impeach the president.