Which Hunt are You Referring To...? 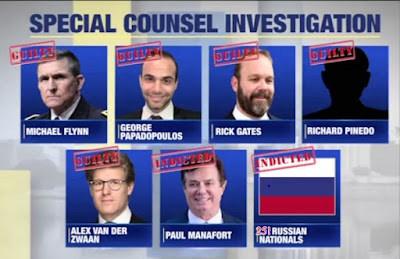 Robert Mueller has issued a new set of indictments through the Assistant Attorney General, Rod Rosenstein. This time, a dozen individuals are named, all Russians and all members of the Russian intelligence agency, GRU.

This is no joke. This is not grandstanding for honors. This is not indicting 'ham sandwiches' as a nuisance tactic. This is the Special Counsel, under the auspices of the DOJ, asserting that the intelligence apparatus of the Russian Federation are culpable actors in the concerted effort by the Russian gov't to undermine the US presidential election of 2016 and more generally to sabotage the electoral process and the democratic system in the west.


In a matter of days, President Trump will meet with President Putin. Parallels to his specious meeting with Chairman Kim Il-sung, are easy to draw. There is one aspect of the Trump/Putin that sets it apart, however. Russia stands accused of attacking the USA whereas the DPRK only made blustering bellicose threats of attack. That might seem like splitting hairs, but it is not. It is the difference between fantasy and reality.

According to all of the US Intel Agencies, Russia has waged sustained cyber-warfare against the USA. Mueller indicted thirteen Russian nationals in February of this year. As a result of that issuance, Alex van der Zwaan, a 33-year-old Dutch citizen pleaded guilty, was sentenced and is currently in prison. Additionally, Richard Pinedo, a California man, pleaded guilty to identity theft and is cooperating with the Mueller probe. Now, twelve additional Russian individuals - members of the GRU, no less - are named in Mueller's indictments. That makes a total twenty-five Russians indicted, so far.

Time for the gloves to come off. Time to squelch any and all talk of 'fake news'. All the whinging about 'witch-hunts' by the president and his supporters must be dismissed out of hand.

Time to stand up for the American system.

Time to end the presidency of Donald J. Trump.