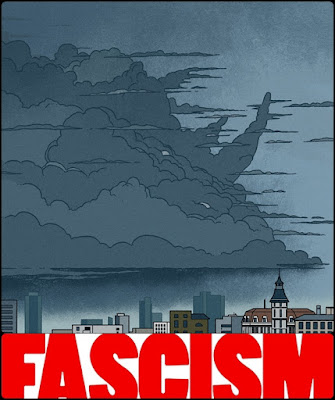 Last Saturday, I saw the Eugene Ionesco play, 'Rhinoceros'. I'd never actually seen the entire play before. As I watched, though, I remembered that the 'rhinoceros' was a metaphor for fascism. I took the opportunity between acts to share that reading with my theater-party of actors and writers. From then on, seen through the lens of historical reference, the play became even more disturbing and terrifying.

Slowly, the fright and disruption of the appearance of the rhinoceros in the small French village became 'normalized'. Intellectuals - the talking-head commentators of the day - rationalized the events, dissecting every aspect, atomizing its elements and boiling down the phenomena into a palatable, if bitter, stew for public consumption.

The towns-folk, who had been stricken with fear and confusion at the impossibility of rhinos thundering through the town harming, wounding and killing those who crossed their destructive path, began changing into rhinos. Normal people, up-right people of rational temperament and traditional up-bringing became rhinoceroses - became fascists.

The thundering confusion and altercations of the growing stampede of metaphorical ungulates passes from being exceptional and outrageous and becomes everyday. The destructive presence of the rhino herd is accepted as a simple, unavoidable fact of life; justified and rationalized. Then, reconciliation and accedence follows with one lone hold-out, Berenger, questioning his own sanity and the verisimilitude of his life, even lamenting his inability to morph into a rhino/fascist himself before reaffirming his humanity at the play's end.

The reality of 'Rhinoceros' is what played out so murderously in the mid-twentieth century and lead the world to war and conflagration. 'Rhinoceros' is the plague of monsters which was defeated, denounced, de-fanged and disemboweled at the Nuremberg Trials. 'Never Again' - was the watch-word; the cry of defiance.

Never Again!
But... here we are again. AGAIN! Stunned to witness Charlottesville. Shocked by the election of Drumpf and his less flamboyant counterparts in Europe and Asia who clamor for authoritarianism, using racism, xenophobia and hatred to inflame everyday, normal people to morph into the mindless rampaging beasts of destruction represented by Ionesco's rhinos.
We cannot allow this to happen. Not again. Never Again!

We must not allow ourselves and our social partners to acquiesce to the herd mentality. We must be ever on-guard and vigilant in a righteous struggle to preserve our humanity; that ethos of social beneficence which has developed over the course of human history.

Rhino/fascists must never be allowed to ravage our society.