The Long Dark Psychotic Break of the American Electorate 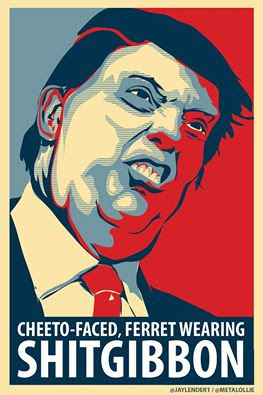 Like many of the oh-my-fricking-god-how-is-he-still-POTUS contingent, I've been trying to figure out how 25% of the electorate voted for an infamous, notorious con-man, fraud, liar... (you know the drill - fill in the blanks with your own favorite ).

A bit like trying to figure out how the magician made the Abrams Tank disappear.

Since the election (ugh), I've held out hope that once the Orange Meringue
Mussolini had screwed the pooch enough times and blathered enough idiocies, bald-faced lies, parapraxis, Freudian slips, Malapropisms and out-right grammatical and syntactic errors, (as he was sure to do) a portion of the mob would come to their senses.

Call me an optimist.

However, the vast majority of people who identify themselves as 'Republicans' still support the Mango Madman despite his monstrous policies towards children and young people (e.g. cancelling DACA, stealing children from their pitiable parents,
de-funding meal programs, etc) and despite the wholly appalling actions of his Cabinet officials; Devos, Pruitt, Carson, Zinke - wrecking-balls all - whose sole apparent intention is to ruin and undermine every agency of government, particularly their own.

We've all heard the rambling insanities of Steve King, Jim Jordan, Stephen Miller, the various squawking heads on TV spinning the latest insanity as 'business as usual' with a Trump-twist.  Their rhetoric is detached from rational thought and reality. Their demeanor is that of a gerbil facing a cobra. Crazy people, out in public, amped up on adrenaline, fearful of everything, spouting bull-shit rote-learned from their favorite propaganda program.

Yet, these mannerisms were symptoms rather than the cause, certainly. There was an element missing from my understanding of what has been described by even Republicans as a cult-like mentality.

Then, a minor epiphany.

It occurred to me that what we've had to deal with is a protracted psychotic episode on a large scale. A group psychotic break; a fugue state shared by millions via social and mass media.
Suddenly, Steve King's demented stream of semi-consciousness reminded me of the days of talking down a person having a 'bad trip'. The tripper was no longer sharing a 'common' reality.  Their hallucinations had supplanted that 'common' reality. Imaginary monsters were threatening them just out of sight. Ice was hot and fire was cold. The world was seen through the wrong end of a telescope-turned-kaleidoscope with demons dancing at the far end.

Put on some soothing music, brew some chamomile tea and ride it out.

I contend that's what the majority of people are experiencing these days ; 40% of Americans are experiencing a psychotic break. On the other hand, 60% of Americans view Drumpfen-dork unfavorably (to put it mildly) and don't buy into the Cult of the Orange Gee-Zus. If one factors in those of other nations (Canada, France, the UK, Germany, Japan, China, etc) who see Drumpf as an abhorrent aberration, a deranged malefactor or simply a bumbling buffoon, the odds look much better for us.

Unlike, those inner-astronauts who took the brown acid, unfortunately, there's no chemically determinable end to the delusions of the Cultists about Drumpf being a beneficial - even beatified - entity.

It has been suggested that the pervasive opioids pandemic might lie at the root of this psychotic break. More study needs to be done, but given the demographics of Drumpf Cult members, it seems plausible. Toss in a few meth-heads in MAGA T-shirts and the picture comes into sharper focus.